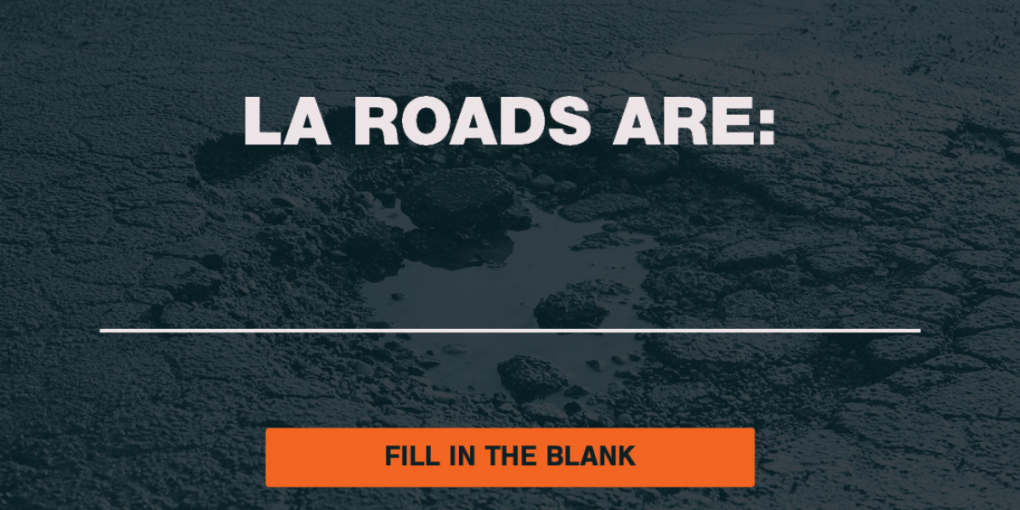 Baton Rouge – A coalition of advocates for fixing the state’s roads and bridges have launched a new campaign to build support for fixing and improving Louisiana’s failing bridges and roads. The Louisiana Coalition To Fix Our Roads (LCFOR) is asking drivers and the public to join them in their efforts to rally lawmakers to pass a comprehensive plan to meet the state’s growing transportation needs.

“People across the political spectrum agree, maintaining our roads and bridges is a core function of government. It affects us all – our families, our businesses, our state’s economic opportunities,” said Erich Ponti, LCFOR’s Director. “Legislators in Baton Rouge need to stop ignoring the issue and begin working together on a plan to stop the crumbling of our roads and bridges.”

A 2017 study from a national transportation research group, TRIP, examined the state of Louisiana’s roads and bridges. The numbers show the state’s transportation system is in poor shape.

Business leaders from around the state have joined the coalition calling for lawmakers to pass a plan for fixing the state’s transportation infrastructure because of the benefits to Louisiana’s economic growth.

“Our public infrastructure is crumbling beneath us,” said Mike Olivier, executive director of the economic development organization Louisiana’s Committee of 100. “Car repairs are hitting people in their wallets, holding our state’s economy back and putting our people’s lives at risk. Now is the time for Legislators to address sustainable funding to fix our roads and bridges.”

“Roads and bridges are the arteries of our economy,” said Michael Hecht, President & CEO of Greater New Orleans, Inc. “If they are clogged and failing, our economic performance will suffer due to higher costs, decreased safety, and foregone opportunity – as companies take their businesses to where they can safely and expeditiously move their people and products.  Looking forward, an investment in transportation infrastructure is an investment in economic opportunity for the next generation of Louisianans.”

“The condition of roads and bridges greatly influences the economy’s ability to function and grow,” said Deborah Randolph, President, Central LA Regional Chamber of Commerce. “ State investment in transportation and other forms of vital infrastructure is key to creating good jobs and a foundation for a strong economy now and in the future. Now is the time for the Louisiana Legislature to develop a plan to fund infrastructure improvements that have the potential to pay off economically in private-sector investment and job growth.”

“We all know that Louisiana must increase its investment in transportation infrastructure statewide.  It is critical to the state economy,” said Baton Rouge Area Chamber (BRAC) President and CEO Adam Knapp.

Road repair and improvements were top of mind at the local level recently. Voters in East Baton Rouge Parish on December 8th overwhelmingly voted in favor of a local half cent sales tax for transportation infrastructure projects.

“Lawmakers at the state level need to make fixing our roads a statewide priority like local governments are doing,” said Ponti.

LCFOR has launched a grassroots campaign to encourage people to share what they think of the state’s roads. Their fill in the blank digital ad asks Louisianans to complete the sentence “LA Roads Are ________.”

“We want to hear from those who drive on our roads and bridges every day,” said Ponti. “We’ll make sure your voice is heard by sharing those responses with lawmakers. The only way we’re going solve this problem is for people to step up and demand a plan from their elected officials.

“Our campaign will empower people to directly connect with their lawmakers and share with their friends and followers that they are in fact fed up with our state’s terrible roads and bridges,” said Ponti.

The Louisiana Coalition to Fix Our Roads (LCFOR) is a nonprofit, statewide organization that advocates for improving roads and bridges. LCFOR is made up of business leaders, associations, and chambers of commerce who believe that a safe and efficient highway system is essential to continuing our state’s economic growth.