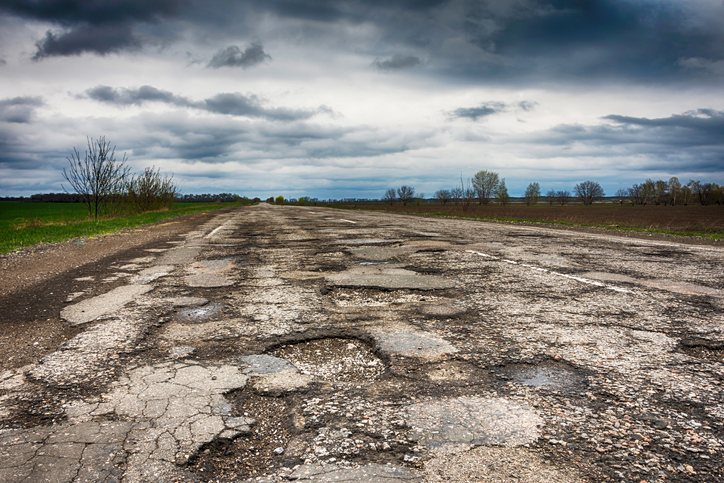 Statewide, 26% of Louisiana’s major roads are in poor condition. Let’s put some perspective on that. What if, at your next crawfish boil, one out of every four crawfish you ate tasted pretty bad? What if four out of the next dozen eggs you bought was rotten and one cracked? What if one out of every four tomato plants you planted last year died? You would NOT be happy. So, why is it that it’s come to the point where 26 percent—that’s a little over one quarter—of the roads in our state are in poor condition?

What does “poor condition” mean?

Roads rated in poor condition are roads that may show signs of deterioration, including rutting, cracks and potholes. In some cases, poor roads can be resurfaced, but often they are too deteriorated and must be totally reconstructed, which is a much more expensive alternative.

But wait…it gets worse.

Looks at these snapshots of major roads in some of the urban areas around the state provided by nonprofit surface street research organization, TRIP:

These additional results show that in Louisiana’s major cities, it’s more like one in three roads are in poor condition and edging up to one in two—that would be every other major road in our state is in poor condition. Taking it a step further, look at these sorry statewide facts:

So how did we come to this?

To begin with, there hasn’t been any new funding since 1985. That’s 35 years using the same budget as our population continues to grow, increasing the wear and tear on our roads. But there’s more to it than just time and population growth. In Louisiana, we live in a humid climate where we get an ample amount of rain. While this climate may be good for our complexions and our crops, it can play havoc on our paved roads.

Combine the moisture, hot summers and cold winters with the steady pounding of traffic and you’re going to get some wear and tear. Moisture often works its way into road surfaces and the materials that form the road’s foundation. Road surfaces at intersections are even more prone to deterioration because the slow-moving or standing loads occurring at these sites subject the pavement to higher levels of stress. It is critical that roads are fixed before they require major repairs because reconstructing roads costs approximately four times more than resurfacing them.

As roads and highways continue to age, they will reach a point of deterioration where routine paving and maintenance will not be enough to keep pavement surfaces in good condition and costly reconstruction of the roadway and its underlying surfaces will become necessary. And this is where we are today with many of our roads that are in poor and mediocre condition.

What can you do?

Our poor and mediocre roads are just going to get worse and cost us even more in the long run. We don’t deserve to have one in four roads in our state damaging our cars and offering us substandard transportation. Share this article and support lawmakers who will demand recurring sustainable revenue to fix our roads and bridges. Do it now before it’s too late.