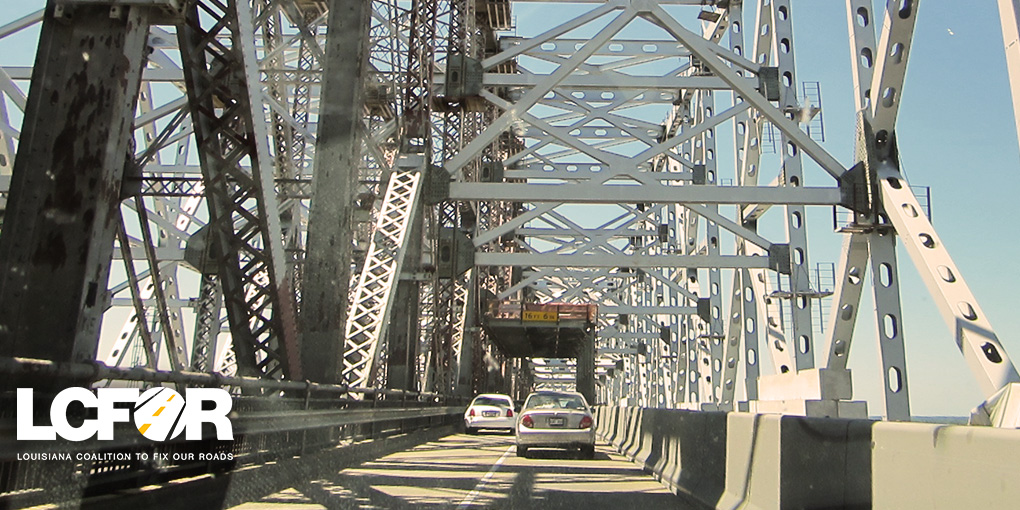 Louisiana’s roads, highways, and bridges form vital transportation links for the state’s residents, visitors, and businesses, making the condition of our roads a focal point for many. Not only does our transportation quality reflect potential economic advances, but our roads provide daily access to homes, jobs, commerce, natural resources and recreation, and emergency services required by Louisiana’s growing population. The state’s population grew to approximately 4.6 million residents in 2020, a 4% increase since 2000. Louisiana’s motorists and businesses require a high level of personal and commercial mobility. Taking into consideration the amount of water area, this makes repairing our bridges a critical part of future growth in population, tourism, business, recreation, and vehicle travel. Improving transportation funding is critical for Louisiana’s future.

The Hidden Cost of Deficient Roads

Driving on Louisiana roads that are deteriorating, congested, and lack important safety features cost motorists a total of $7.6 billion annually. On average, drivers in Baton Rouge pay a total of $2,431 in vehicle operations and repairs, wasted fuel due to congestion, and traffic crashes while drivers in New Orleans pay $2,403 on average. Due to inadequate state and local funding, nearly half of major roads and highways in Louisiana are in poor or mediocre condition. Driving on rough roads costs a driver more annually than a road in good condition. In North Louisiana, Shreveport faces the worst percentage of poor roadways at 45% and contains the least amount of “good” roads at 17%.

The costs of deficient roads continues to be a burden on Louisiana drivers. During the Covid-19 pandemic, vehicle travel in Louisiana dropped as much as 36 percent, reducing congestion substantially; however, traffic has increased by 30% since 2020. Congested roads choke commuting and commerce and cost Louisiana motorists $3 billion annually in the form of wasted fuel. In the state’s most congested areas, drivers lose up to $1,312, spend as much as 60 extra hours per year on the roads, and waste 26 gallons due to congestion.

Three major factors are associated with fatal vehicle crashes: driver behavior, vehicle characteristics like dependency, and roadway features. It is estimated that roadway features are likely a contributing factor in around one-third of all fatal traffic crashes. According to the National Highway Traffic Safety Administration (NHTSA), the economic loss of traffic crashes includes:

Improving safety on Louisiana roadways can be achieved through a variety of safety features like:

The life cycle of Louisiana’s roads is greatly affected by the state and local governments’ ability to perform timely maintenance and upgrades. Provided by the Federal Highway Administration (FHWA), pavement data suggests these statistics regarding the condition of Louisiana’s roads and bridges:

Pavement failure is caused by a combination of traffic, moisture, and climate. Moisture often works its way into road surfaces and the materials that form the road’s foundation. Reconstruction of roads costs four times more than minor repair, so it is critical that roads are fixed beforehand. Once roads continue to age, they reach a point of deterioration where it is impossible to perform routine maintenance, resulting in inadequate roadways for travel.

Given the amount of waterways in Louisiana, its bridges form a key link in the state’s highway system, providing communities and individuals access to employment, schools, medical facilities, commerce, and other essential services. Bridges that are structurally deficient may be posted for lower weight limits or closed if their condition warrants such action. Restrictions of vehicle weight may cause dependency on alternative routes to get around. For vehicles like ambulances, commercial trucks, school buses, and farm equipment, this could put the public at even more extreme of a risk. 13% of Louisiana’s bridges are rated in poor structural condition, the seventh highest share in the U.S.

Most bridges are designed to last 50 years before major overhaul or replacement while modern bridges can last up to 75 years or longer. In Louisiana, 33% of bridges were built in 1969 or earlier. The service life of bridges can be extended by performing routine maintenance such as resurfacing decks, painting surfaces, ensuring proper drainage, and replacing deteriorating components. Routine maintenance helps to keep the condition of our bridges intact, but most will require costly construction or major repairs to remain operable.

Revenue from Louisiana’s motor fuel tax, a critical component of state transportation funding, has been eroding at an alarming rate since it was established nearly 40 years ago. Increasing vehicle fuel efficiency and the increase of electric vehicles is likely to erode the fuel tax even further. Fuel efficiency is expected to rise by 2030 to 32 miles per gallon. By 2040, electric vehicles are expected to represent 30% of the passenger vehicle fleet. This reduction in fuel expenditure will inevitably reduce the purchasing power of our roads down to zero.

In addition to state funds, the federal government is a critical source of funding in Louisiana’s roads, highways, bridges, and transit systems. It provides a significant return based on the revenue generated in the state by federal motor tax. Most federal funds for highway and transit improvements in Louisiana are provided by federal highway user fees, largely an 18.4 cents-per-gallon tax on gasoline and a 24.4 cents-per-gallon tax on diesel fuel. Since 2008, revenu into the federal Highway Trust Fund has been inadequate to support legislatively set funding levels. While the FAST act was extended to expire on September 30, 2021, it still does not provide adequate funding to meet the needs of Louisiana’s deficient roads.

Louisiana is currently facing a backlog of $786 billion in road and bridge projects. As Louisiana works to enhance its thriving, growing, and dynamic state, it will be critical that it is able to address the most pressing transportation issues by modernizing roads, highways, bridges, and transit infrastructure. By improving the physical condition of its transportation network and enhancing the system’s ability to provide efficient, safe, and reliable mobility for residents, visitors, and businesses, Louisiana will see long-term economic growth. Without a substantial boost in state or local transportation funding, essential projects will continue to fall by the wayside, and quality of life will continue to worsen. It is critical that we work together to build a better future for Louisiana residents. Support Louisiana Coalition to Fix Our Roads in our fight to improve transportation funding in Louisiana.